started a topic almost 2 years ago 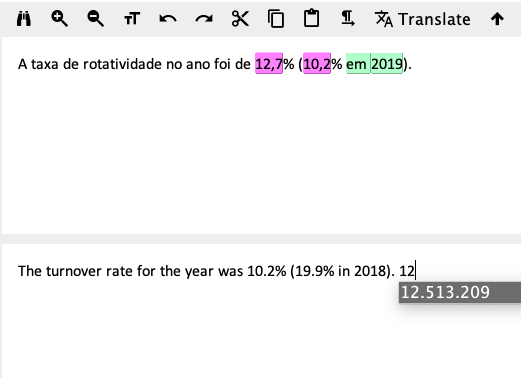 said almost 2 years ago
Some answers: difference in exact matches between two cat tools or two computers can be caused by many things, like differences in segmentation or tags etc. You should get, however, many high-fuzzy matches. Conversion of full stops and commas isn’t perfect in cte. I’d leave everything as is during translation. I’d define regular expressions as large as possible to match all numbers and valuta characters etc. I’d save these ik a glossary for non-translatable. At the end of the project, I’d run a qa for non-translatables. Then I’d perform a couple of regexes to perform the necessary conversions. You can save them in a text doc or typing assistent. Have a Google for proz.com Anthony Rudd and regular expressions. You’d find references to an example doc contains lots of useful regexes, among them the once’s you need. No comment to the EM diff that you noticed.

said almost 2 years ago
And an article by the hand of Anthony Rudd: https://www.translatorscafe.com/cafe/Articles.asp?Mode=Print&ArtID=173

said almost 2 years ago
You’ll have to create your own regexes. Inspiration: https://www.oreilly.com/library/view/regular-expressions-cookbook/9781449327453/ch06s12.html

If you give examples of the conversions that have to take place, I'm willing to try to come up with matching regular expressions for conversions.

I think I have not explained it right. What I need is for the numbers highlighted in pink in the source to be transferred to the target when I type them (maybe this is the F4 shortcut?), but where in the source it is, say, 12,4 , I need it to be 12.4 in the target (and vice-versa, depending on the language pair). I cannot type all numbers in the documents, because it would be insane and also risky (I cannot have wrong numbers in the translation).

In Wordfast Pro, when (for the example numbers) I type 1, I immediately have a dropdown menu with different options to choose from (all of them from the source segment):

I can then use the arrows, choose the one I want, and type Enter.

This is what I was talking about in the second item of my original message.

Have you tried the F4 shortcut? It should turn e.g 12.4 into 12,4 if your languages have that respective number formats.

With F4 I have this (green circle below, and I wonder why that menu is so far away from where I'm typing in the target?): 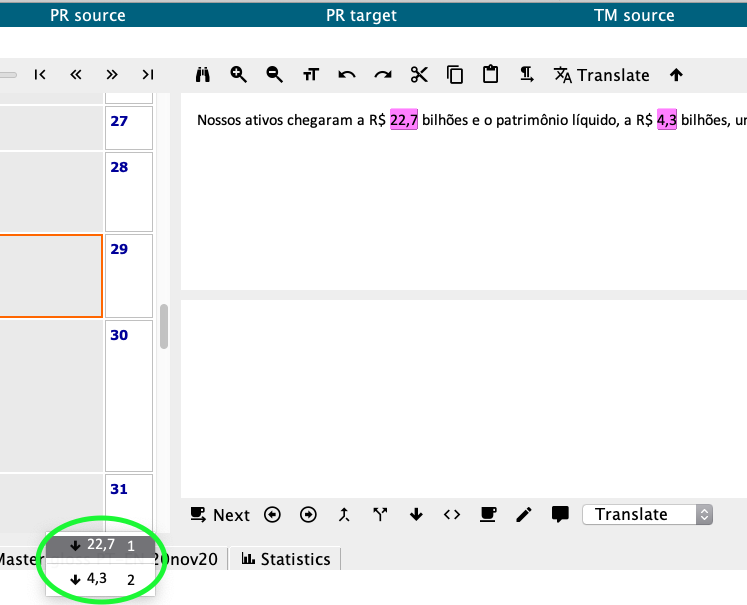 My project configs are:

Thanks for the help, guys!

All F shortcuts trigger pop-up windows at 50% of the main window's height.

?? which of the examples?

>but where in the source it is, say, 12,4 , I need it to be 12.4 in the target (and vice-versa, depending on the language pair). I cannot type all numbers in the documents,

Like I said. I'd personally just transfer everything as is and run a global Search and Replace once all segments have been populated.