started a topic 16 days ago

Is it possible to implement automatic replacement of straight apostrophe ' and quotation marks " in accordance with the user's preferences and language specifics?

That's how it's implemented in Memsource, for instance:

This way, one can easily switch back and forth to quickly insert another type of quote or apostrophe, if they are part of code, for instance.

It's not very handy to keep many types of quotation marks and apostrophes in the keyboard layout or run "find and replace" at the end.

37 CommentsSorted by Oldest First
a

yeah, there are similarities :)

I've managed to dictate in Ukrainian into the internal microphone. But when I switch to Andrea MA USB + Speechware DEC, it won't start.

Googled a bit, and it seems that some interfaces don't play well with the VC: https://www.imore.com/how-use-voice-controls-mac (comments section)

However, even when the feature works (with the internal microphone), it's not quite usable: it misses a lot of things that I say, I need to repeat a lot — similar to your first video, but much worse.

There are other quirks that I think indicate at some internal issues with the VC on my machine: the macro above only works on the first time I trigger it, the microphone icon has a different form: 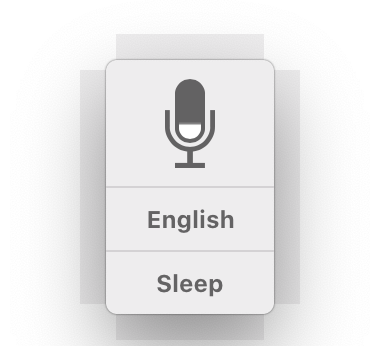 Besides, even if I manage to fix VC, for any other language than the US English the engine is old and won't be as accurate as Keyboard Dictation. The latter uses Siri and also learns from you little by little. So I'll wait to see if they improve VC in Big Sur.

said 6 days ago
And an introduction to VC on macOS Catalina: https://www.computerworld.com/article/3442721/how-to-use-voice-control-in-macos-catalina.html

said 6 days ago
And another one, with some images: https://blog.macsales.com/52069-voice-control-comes-to-macos-catalina/ // Note that with numbers we finally get an equivalent to the Alt+letter mnemonics for menu items in Windows.
a

Here’s a nice demo of VC on iOS

Yeah, on iOS this feature is US English only with no other options. There was no Enhanced Dictation on iOS, so there was no way to add other languages on mobile devices.

It's also characteristic that all those reviewers only use US English in their videos. No British, no German.

Just yesterday, I watched the comparison of Dragon and VC on the same channel: https://www.youtube.com/watch?v=ljLB8m-bPo4

And here is the comparison of Siri vs Dragon: https://www.youtube.com/watch?v=a-hFviYyEfE

BTW, Dragon still works on Catalina for me despite it's discontinued, probably because I also use a small tool Talon Voice that "patches" it. Only testing it, but it looks promising (no dictation in my languages though, I only plan to use it for controlling the computer).

Also, Dragon supports Dutch, so you might still have a chance to find a copy in your language somewhere on eBay if they are not sold out, if interested.

Despite some bugs, Dragon still feels more reliable that VC (US English) or Siri (Keyboard) dictation.

Thanks for the info. I found this one particularly interesting:

Just yesterday, I watched the comparison of Dragon and VC on the same channel: https://www.youtube.com/watch?v=ljLB8m-bPo4

Of course, David could have used two computers and two Macs and two mikes for an even more exact comparison ;).