Should CafeTran Espresso 10 be shipped with layout 6?

started a topic 10 months ago

I often read forum postings at Proz where users say that CafeTran Espresso 10 Croissant looked to 'unintuitive' or 'different'.

I was wondering: wouldn't it be a good idea to ship CafeTran Espresso 10 Croissant with layout 6, just to make it look a little more like Studio and memoQ?

(Or has this already been implemented? It's been a while since I've installed a fresh CafeTran Espresso...) 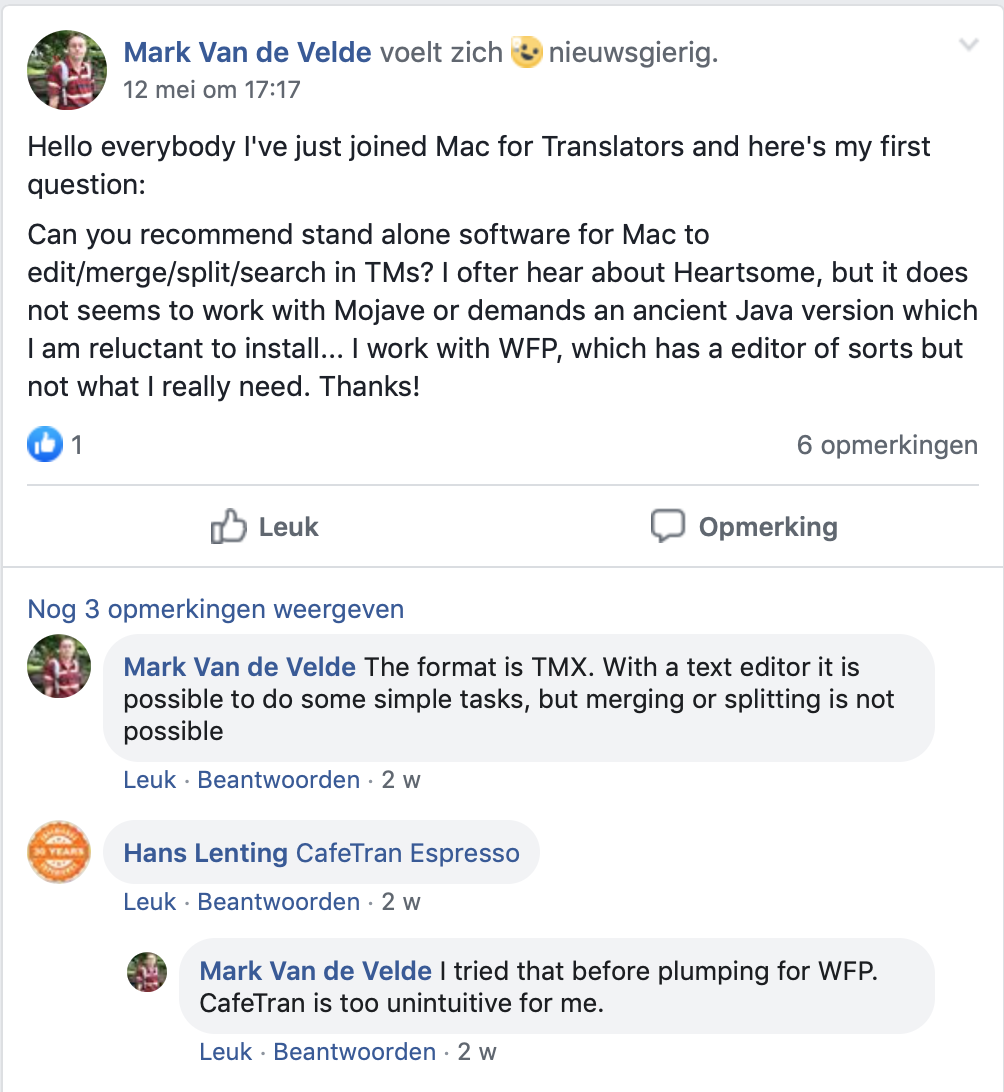 I succeed in switching to CTE only at my fourth attempt over several years, and now I'm very satisfied although, as I said, I would like to see further improvements. Fortunately we have a very active developer who listens to the user base as opposed to other CAT tools, and this makes me more optimist for the future.

said 10 months ago
>: there is space for improvements, especially in the project management compartment. // It would be interesting to hear your ideas for improvement here.

said 10 months ago
1. Wizard to create all client resources 2. link between third-party projects, templates and resources

What else are you missing regarding project management?

On several occasions I've heard of other CAT users who felt Cafetran was not intuitive, or it has a too steep learning curve. I'm talking about translators who, when looking for an alternative and trying various ones, found CT to be the "most different". Being different is not necessarily a negative fact, and indeed CT offers unique and sometimes very brilliant features, but implies extra efforts for the change.

Regarding myself, only at my fourth attempt I decided that I had to succeed, and I know that several experienced users of my previous CAT tool gave up at the first attempt because they "could not get started". (But this was many years ago, and I know that the current Croissant is much easier to use.)

I don't know how many paying users CT has at the moment, but I suspect that they are a rather small part of all who downloaded it for trial. Why? (despite the relatively low price and the fact that it cater for three platform users?)

Given, as I have already said, that I am now a satisfied CT user and that I hope to see the number of stable users increase, I would like to see it change in these areas:

- Project management: being able to open a previous project and find it exactly as it was when last used (resources and layouts); introducing a project creation wizard (no Dashboard), and eliminating the need to select working languages to open existing projects where such languages are already defined.

- Adding a Ribbon-like menu; this is not only an actual trend, but very useful too if created in a rational manner (and CT would look much less different from other main stream CAT tools).

- Reduction of the number of clicks. Actually, it seems to me that I'm still clicking around more often than with my previous CAT tool.

This said, I wouldn't change CT even if the developer decided that my wishes are rubbish.

However, if increasing the number of licenses sold is in his plans and CT aspires to abandoning its image as niche product with a small bunch of fun boys (no offense intended here), and then considering that in the CAT tools market CT is not among the first choices, the perplexity that potential new users may have when opening CT for the first time should be imagined and tackled.

But, if CT wants to keep being a select CAT tool no matter how small the number of users is, it's fine for me. I would never go back to my previous CAT tool (which in its peak time was considered one if not the best in the market). Then, last but not least, I sympathize with the developer.