started a topic about 2 years ago

The whole segment is in the TB:

In this case with both accents: 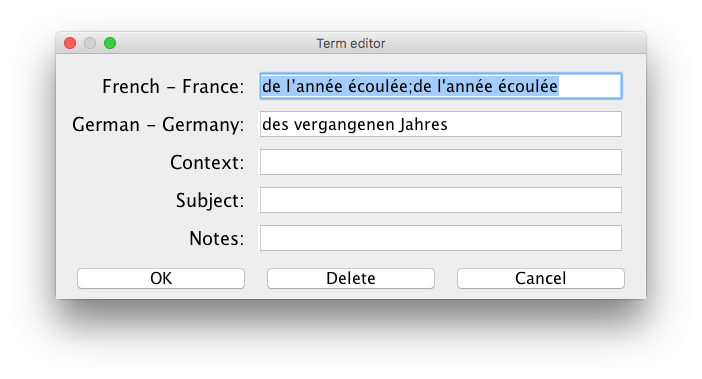 Client TM and Package TM have only one result for the word "DE". Total Recall TM has several results.

Indeed I would expect that AA gives out "Bilanz des vergangenen Jahres".

But first irritating thing: this is the result when pressing F1:

The second irritating thing is that there is a term recognition (see the glossary image), but it is not reflected in the source segment's colors (yes, reload glossary and even CT restart done).

Partial solution: When unchecking the Total recall TM (or simply keeping it out of AA), indeed AA gives out:

3 CommentsSorted by Oldest First
I

You should treat the percentage result for AA as an approximation. CT has no notion of meaning. For example, two assembled fragments can give the perfect result - then you may ask why it is not 100%, right? - other times it can be very low in real quality. It all depends on your resources.

Having said the above, the algorithms keep evolving so perhaps one day, CT will "understand" which assembled fragment is more meaningful to pick.

said about 2 years ago

Would it make sense to have this "out of AA" option as a permanent setting (such as the case with Read-Only)? As fas as I see it isn't.

Just for curiosity: Would a glossary in TMX format bring better matches?

And there remains the problem of non-recognition in the source segment editor (with green color), even not after ruling Total Recall out.

said about 2 years ago

> Just for curiosity: Would a glossary in TMX format bring better matches?

I don't think so.

> And there remains the problem of non-recognition in the source segment editor (with green color), even not after ruling Total Recall out.

That would bring about a much bigger problem to differentiate between glossary match colors, TM match colors and non-translatable colors. The user would be lost in the colorful patches possibly canceling each other out in the source segment editor.