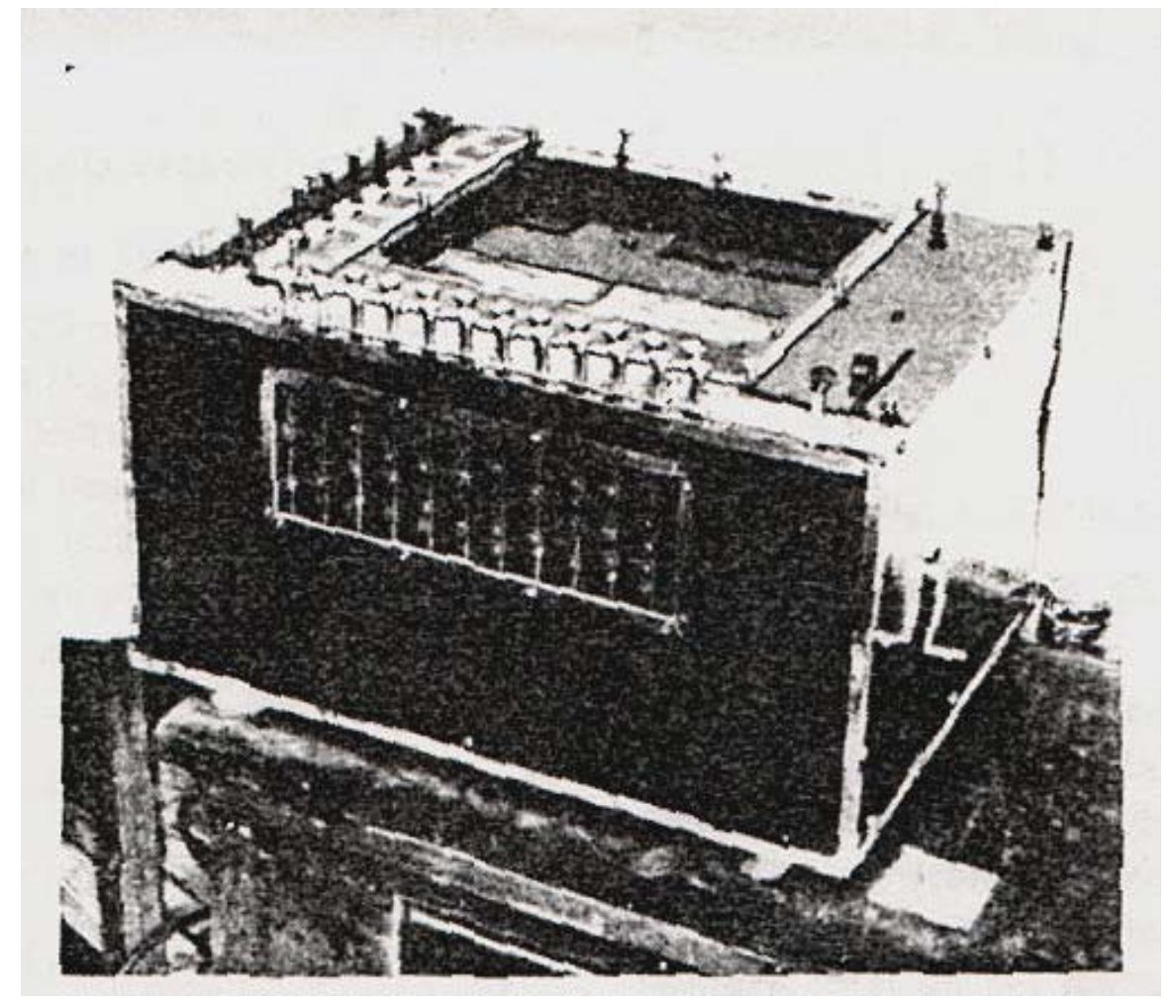 Otlet understood that his ‘mechanical brain’ did not yet exist, so one can imagine his  surprise  when  a  ‘cerveau  mécanique’  was  presented  in  1937  at  the  World Exhibition at Paris. He immediately contacted its maker, Georges Artsrouni, who had received the patent for this invention as early as 1933.21 Artsrouni’s invention  was basically a  mechanical translator in the  form of a typewriter  (Corbé 1960; Dumas 1965; Hutchins 2004).22 However, it could be used as an automatic telephone book, a train timetable, a  city  guide,  a  dictionary  in all languages, a table of  logarithms and as an instrument to get information about commercial telegraph codes. It had a memory for dictionary entries, a keyboard for entering words, a search mechanism and a means of displaying results in series of windows on the ‘clavier’ or keyboard. Reading the parts that Otlet underlined in Artsrouni’s letters to him, one can see that he was  especially  interested  in  the  idea  that these  various  kinds  of data  could  be represented directly and automatically on the cylinder of the typewriter. But despite Otlet’s interest in this forerunner of computer-based mechanical translation systems and of what are  now  being  called  ‘startpages’,  which  serve as portals to practical information, we will see from his visualizations that the ‘cerveau mécanique’ he had in mind was clearly more than that. It was to be a  ‘collective brain’ for organizing and disseminating knowledge on a world wide basis.

The patent granted to Georges Artsrouni on 22 July 1933 was for what he called a ‘mechanical brain’ (cerveau mécanique), a general-purpose device with many potential applications. It seems that he had been working on his invention since 1929 and had completed construction by 1932. (The source for information about Artsrouni and his machine is the article by Michael Corbé (1960), an American working for UNESCO, who apparently met Artsrouni towards the end of his life.)

Georges Artsrouni was a French engineer of Armenian extraction who had been a student at a school in St.Petersburg. His ‘mechanical brain’ was not primarily a calculator – unlike its computer successors, often called ‘electronic brains’ in the 1950s – but a general-purpose storage device with facilities for retrieving and printing stored information. Artsrouni suggested applications such as the automatic production of railway timetables, of telephone directories, of commercial telegraph codes, of banking statements, and even of anthropometric records. It was claimed to beparticularly suitable for cryptography, for deciphering and encrypting messages, and finally it was claimed to be a device for translating languages.

At the Paris Universal Exhibition in 1937 the device attracted much attention, several thousand demonstrations were given and it received a prize (diplôme de grand prix) in the section for data processing (mécanographie). A number of state organizations were impressed by its versatility and entered into provisional contracts with the inventor for the development of prototypes designed for their particular requirements. The French post office, for example, wanted a machine for postal cheque accounting; the railway administration envisaged a machine for printing tickets to various destinations; the Ministry of Defence wanted a ‘brain’ for registration and processing of prisoners of war. None of these plans came to fruition after the Occupation of France in 1940, and it meant the end for the ‘mechanical brain’. By 1960, according to Corbé, there remained just two prototypes in two different versions.

From the beginning, Artsrouni saw one of its main applications as a mechanical dictionary for producing crude word for word translations. In his 1933 description, he stated explicitly that his ‘brain’ could be adapted for the “translation of a foreign language into one of the three other languages recorded in it”, and that even if “the existing model could operate only on these four languages... the number of languages and the number of words contained in the dictionary for each language could be without limit.” (Corbé 1960).

As a mechanical dictionary, the ‘brain’ had four basic components: a ‘memory’ of words in the four languages (bande de réponse), an input device consisting of a keyboard activating a reading head (mécanisme de repérage), a search mechanism (sélecteur), and an output mechanism (mécanisme de sortie) activated in its turn also by the reading head. The four components were driven by a motor, and the whole apparatus was contained in a rectangular box measuring 25x40x21 cm.

The memory was the core of the device. It consisted of a paper band 40 cm wide, which could be up to 40 meters in length, moving over two rolling drums and held in position by perforations on the edges. The dictionary entries were recorded in normal orthographic form (i.e. not coded) line by line in five columns. The first column was for the source language word (or term), the other columns for equivalents in other languages and for other useful information. Using a Varityper, the band could contain up to 40,000 lines, which could be doubled if both sides of the band were used. For even greater capacity, Artsrouni proposed that entries could be printed in two different colours (red and blue) superimposed on each other on the same lines, and read by switching from one to the other by changing filters. Since the machine could use several bands, and since the width of the bands could also be increased, the amount of dictionary information could be infinite – as Artsrouni maintained, it was limited only by the effort required to record the data itself. As a further feature, the device was furnished with a recording mechanism permitting the user to modify the contents of the memory by suppressing some lines and adding others. Such modifications would be easy to make because the sequence of entries could be perfectly arbitrary.

Input, search and output took place on a board on the top of the machine (see Fig.1). At the bottom of the board, nearest the operator, came the input keyboard; immediately above it came a row of lettered cogs to display the search word and at the top, furthest from the operator, came a row of slits for displaying the five columns of a line selected from the memory device. The word (or term) to be found (i.e. translated) was input at the keyboard and, through a linked mechanism, displayed on the row of cogs (the reading head) – apparently up to a maximum of ten letters. Corrections to input could be made by pressing a button to set the reading head to neutral and by inputting again.

The input word was linked to the dictionary memory by the ‘selector’ search mechanism. This also consisted of a band (paper or metal) rotating on two moving drums. The band contained all the words (terms) that could be selected and searched for, listed in the same order as recorded in the memory; however, in this case, words were coded in the form of perforations (i.e. similar to those on the paper tapes of the 1950s and 1960s).

The selector mechanism located, via the perforation band, the corresponding word (term) in the memory. The whole line (five columns) was then displayed in the row of five slits at the top of the operator board. These slits represented the output mechanism: the first slit showed the source word and the four others the translations and other information. (The number of slits could be increased to 15 if desired.) The slits were provided with windows of red and blue glass, allowing users to select either blue or red entries. As well as this visual display of results, the ‘brain’ could be provided with a printer to obtain typed output. Even more ambitiously, Artsrouni envisaged spoken output by a special mechanism (which was not described by Corbé (1960), but which presumably would have involved pre-recording on a tape.)

- the word to be translated was keyed in, which activated automatic

movement of the cogs on the reading head;

- the motor set into motion simultaneously the bands of the selector

mechanism and the bands of the memory device;

- both bands halted when the perforations of the selector matched exactly

those indicated by the reading head;

visually by the operator, or typed out, or produced as sounds;

It was claimed that the selector and the memory could operate at a speed of 60 seconds for 40,000 lines. If the search began midway on the band this speed would be doubled. In fact, a special braking and acceleration device was suggested that could reduce the search of a full band to 10 or 15 seconds. According to Corbé, even these speeds applied to the oldest model. In a later model the friction between the reading head and the selector could be eliminated by the use of cathode lamps for display instead of the mechanical cogs, and the search speed could be further reduced to three seconds.

When he put forward his invention, Artsrouni was not thinking of fully automatic translation and certainly not of high quality translation. He was no linguist, and had no awareness of problems of polysemy, idioms, or syntactic ambiguity. But he did believe that his device could be used for producing quick rough translations. He thought that operators could use a telegraphic style for input and output, and a ‘telegraphic language’ could act as an intermediary language – allowing people not knowing each other’s languages to convey simple messages. It would not replace translators, but it could aid communication. In addition, Artsrouni envisaged a dictionary of ‘phrases’ rather than words, and thus the possibility of more accurate translations. The problem of course would be the size of the ‘memory’, the cost of compiling the dictionary, and the slow operating speed.

In the opinion of Corbé (1960), the overall conception bore considerable similarities to the photoscopic disk device under development during the 1950s by Gilbert King for the USAF Mark I and Mark II translating machines.3 In both cases, the devices were non-electronic storage mechanisms which could be used for large dictionaries in translation systems and capable of producing simple word-for-word rough ‘translations’. The principal difference, of course, was that King’s device was linked to an electronic computer for the search, retrieval and manipulation of data. Artsrouni’s device operated purely mechanically.

When MT research began in France in the late 1950s, it was believed by many researchers that digital computers, as then constructed, were not suitable for mechanical translation, and that what was needed was special-purpose translation machines. In an account of the work at IBM France, Corbé and Tabory (1962) stated that “As far as our equipment requirements are concerned, they are definitely oriented towards a very large memory provided with a relatively rudimentary logic limited to a series of essentially identical look-ups.” They regarded the ideas of Artsrouni for such a device as still valid: “The possibility of building such a specialised device was indicated about thirty years ago by G.B. Artsrouni to whom we are very much indebted in this respect.” In a footnote, it is stated that the inventor “died a few months after the publication of this article [Corbé 1960]4, leaving a considerable body of unfinished research” (Corbé and Tabory 1962: 640). 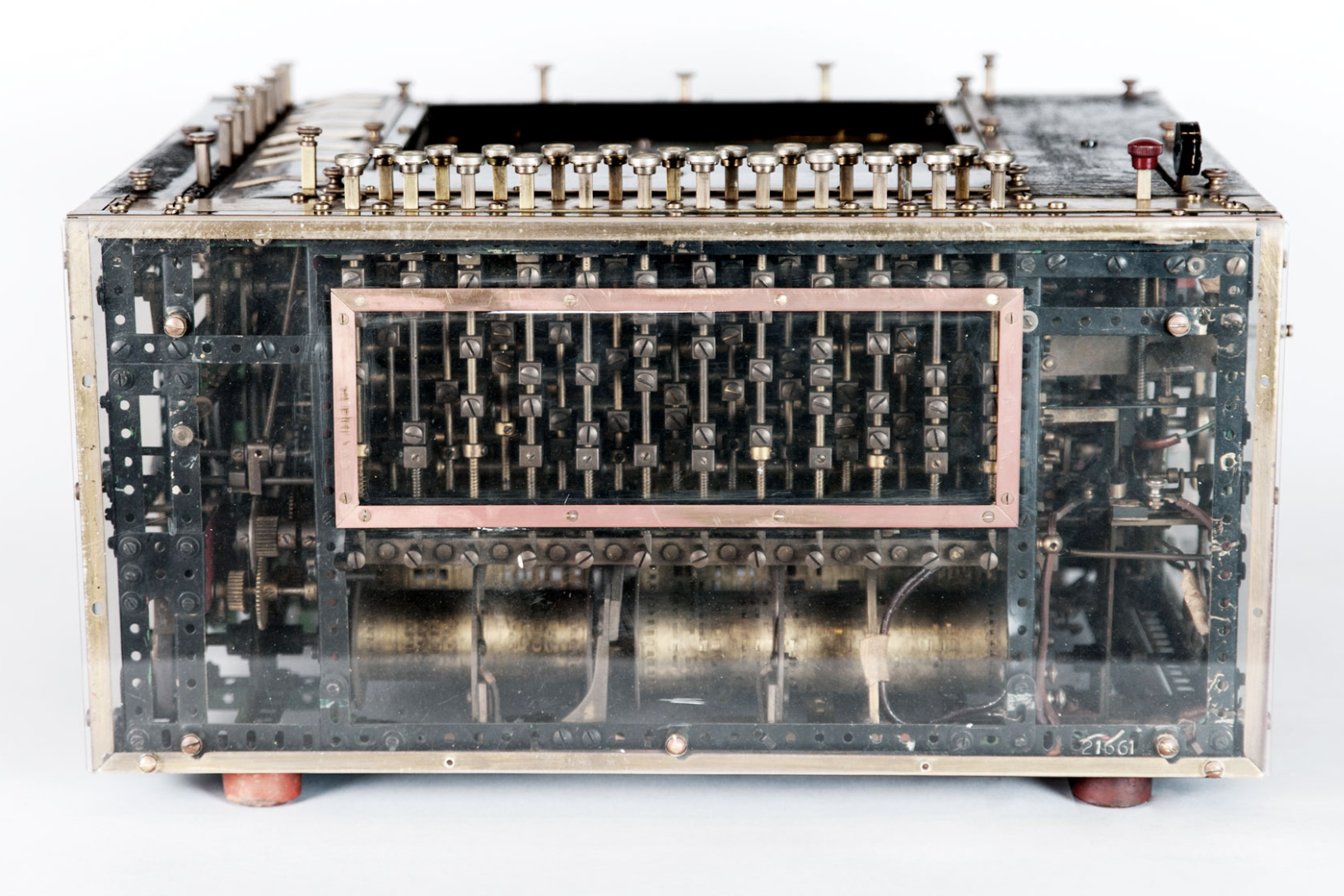