REQ: Other approach to insert TM matches with the keyboard (or not?)

There might be some people working with more than one TM (and usually not more than three, I suppose – Project/client-specific TM, Big Mama (Total Recall), TM from the client, with the latter two read-only).

But when working with the different TMs there might be some problems.

In the case above (project TM left, Big Mama/Total Recall TM right), there is no way to enter the hit from TR. Cmd-1 enters "NOTE:" (unfortunately, the TR hit is correct, but TR has always low priority).

Same in the next example:

Strange enough, with other hits, this works perfectly. Cmd-1 enters the best hit, no matter from where, while here it did not work.

Then there is the case above, where the percentage is equal. I assume it will be attributed to the TM with the higher priority, but I am unsure about that.

What do you think?

7 CommentsSorted by Oldest First
I

With additional shortcuts, things will get complex when the user works, say, with six separate TMs. However, the simple solution would be to add some best fuzzy matches to auto-completion. Then, they will be offered for insertion as you type the first characters of the fuzzy match.

> With additional shortcuts, things will get complex when the user works, say, with six separate TMs.

Yes, indeed, though I think three TMs will do it most of the time.

Nevertheless, how do these (two, three or six) TMs behave in relation with the shortcuts? How does the shortcut behave when two TMs have the same match percentage? From the examples above I had the impression it was a bit erratic. but maybe I am mistaken.

Example: in the first shortcut it would be nice to be able to enter the right hit (from TR with lower priority) with a shortcut, Same in the second (though, as commented, it sometimes works, so I cannot exclude my mistake or misperception)

You may need to activate autoassembling panel pop-up from the menu Translate to place the best matches easily via the numerical keyboard shortcuts. You may also increase Fuzzy match display limit from 3 to 6 in Memory preferences. CafeTran really allows for flexible handling of fuzzy matches by various approaches - via shortcuts or fast mouse selection, from TM panels, Matchboard, Auto-assembling pop-up panel.

Just had this case of user scenario (client TM): 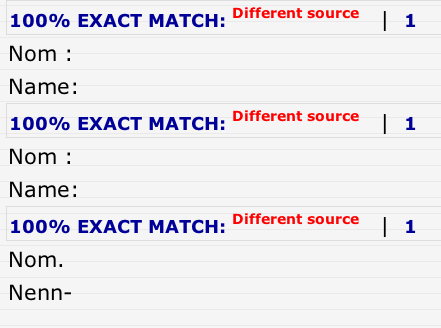 If I am not mistaken, even the Total Recall TM and the TB contained this entry. But CT automatically inserted the 3rd entry (that's wrong here). I assume it was taken as it was the last (most recent) entry found in the TM.

Would it make sense to get a kind of screws to adjust this behaviour? E.g.

IF more than one match are (nearly) equal -> INSERT this match

ELSE INSERT most recent match

Why do you assume that 100% match from client's TM is less important than Total Recall's or Terminology Base's 100% match? The decision for determining the significance of 100% duplicate exact match may vary for each user. The described algorithm can work for your translation TM context but it may not be the case for other translation TM contexts. As CT needs to determine what to insert, its decision to pick the most recent match (meaning the newest) seems to be as neutral as possible.

said over 2 years ago
Indeed the match above could be the right one, as long as it is the most recent (could be e.g. a change in terminology).

So we can assume that CT always inserts the most recent match?

> So we can assume that CT always inserts the most recent match?

Yes, when the percentage for exact matches is the same, the most recent exact match should be auto-inserted.