CafeTran with Studio and MemoQ

started a topic about 4 years ago

I see there are lots of discussions about Studio and CafeTran. My question is quite simple. When agencies say they only work with Studio, can we accept projects from them with CafeTran? And the same goes with MemoQ? Also, do I need to be a CafeTran wizard or is it not too complicated?

33 CommentsSorted by Oldest First
a

said about 4 years ago
Re. Studio, CT only semi supports Studio projects. It will handle very straightforward translation tasks no problem, but can run into difficulties with anything more complicated.
You can't, for example, change the order of tags, can't add e.g. italic formatting if it's not in the source, can't merge or split segments, etc. etc.

I don't know about MemoQ, but I imagine it's a similar story.

Okay. Thank you for your quick reply.

>but can run into difficulties with anything more complicated.

You can't, for example, change the order of tags, can't add e.g. italic formatting if it's not in the source, can't merge or split segments, etc. etc.
I don't question your experiences, but I'd like to add a remark that they probably depend on your language combination and the formatting of the documents you translate.
This is to say that in the thousands of Studio files that I have translated in CafeTran, I never had to add or change any formatting or split or join any segments. Mileage varies.
So I'd like to say that CafeTran suggests Studio packages superbly – whereas memoQ can only be handled via MQXLIFF. No packages supported whatsoever.
j

My language combination is French to English. I have to say I often split and join segments so that could be an issue. I guess the thing to do is give it a try and see how things go.

Thank you again for you quick reply.

said about 4 years ago
I think what Hans means is that the significance of these limitations varies depending on your language combination, which is undoubtedly true.
My combination is German to English and the differences in word order, together with customers who, not entirely unreasonably, don't know the first thing about how to set up proper segmentation rules, mean that not being able to merge segments is a real pain.

> have to say I often split and join segments so that could be an issue.

In Studio this neither is straight forward.

said about 4 years ago
Not true Hans, this is entirely straightforward in Studio (unless the client has blocked it).

So do you work in Studio and CafeTran?

said about 4 years ago
Sometimes, which rather defeats the object.
I do a combination of 3 things:
1. Cross my fingers, say a little prayer and deliver files which I've worked with in CT only.
2. Work in CT then check it and do anything I couldn't do in CT in Studio.
3. Turn down Studio projects.

I was thinking I could just avoid Studio projects but I'm not sure now. Thanks for you reply. That tells me a lot. I think the first step is to try a small Studio project and see how I get one. It sounds like you'd rather not use Studio if you can help it.

I guess people can get to great pains to avoid working in Trados whenever possible… I’m one of them.

Apart from personal preferences, likes and dislikes (and the fact that when you get to know CT, you certainly want to leverage its strengths most of the time), one must take into account many CafeTran users are not working on a Windows platform, which means that they cannot run Trados natively. They either need to dual boot or use Virtualization software if they have a copy and want to use it.

The fact CafeTran can be used in multiple OS platforms (and even allow working on bilingual files coming from other tools) is one of its biggest strengths.

I’m on Linux right now, but even if I was on Windows, I think I would still prefer working on CafeTran, and that also says a lot about the software. It’s powerful and enjoyable.

So, I cannot tell about MemoQ, as I only have experience with Trados files and packages, but here are some additional comments:

CafeTran handles both SDLXLIFFs and Trados packages (allowing you to open packages and create return packages), although it depends on the resources attached to the packages. In packages, attached Trados memories are automatically opened, but not Termbases I think. You need to convert SDLTB with external tools or ask for an exported format. This can be a limit for some projects.

When you Finalize the translation (Export button gets renamed), it sets the translated status to all segments, so the file appears as translated in Trados and can be exported to the original file format from there.

—CafeTran cannot be used for Reviewing Trados jobs, which depend on tracking and showing changes.

—Understandably, it cannot be used to export files to the original format,, which can be a limitation if you do not have a copy of Trados, and is sometimes asked.

—Again obviously, but it can also be a trouble, you cannot create SDL Trados projects, which means if the client wants to receive Trados files in return, he cannot provide the original source file but the SDLXLIFF files or Trados packages. The PM has to prepare the project for you if you do not have a working copy of Trados. I’ve never come across unsegmented files or files not prepared properly, but it can also happen.

—All nonnative bilingual files that you import on CafeTran cannot be used for exporting/importing for bilingual review in Word/LibreOffice, which is a feature I often use for running Antidote (which is great for both French and English).

—Pro-tip: You need to be extra careful when using Notes in Studio Files, as those produce export errors when one tried to Finalize the file in Studio and are not mapped to Studio Comments. Delete Notes before exporting. If you respect source tags and remove any Notes, errors are much less probable to occur in Trados projects.

—No limitation, but another tip: When you open a bilingual file in CafeTran, it is not imported in Projects folder but opens directly from the file location you used.

You may need to create a Project Memory (and a Glossary) yourself (Memory>New memory, then Save memory in the same folder | I usually untick Memory and Glossary and create them manually from CafeTran’s menu). If you reopen the Trados files, you might need to manually reopen the memory (from Memory>Open or Memory>(Recent) Translation memories).

—Of course, you can also open multiple Trados files in one project, by ticking Documents folder in the Dashboard. Do not use subfolders in the folder you select though. You can then easily “glue files” or “unglue” them and in general navigate between them. Very nice.

Finally, if you want to do a small test project, maybe one of us can send you a Trados file so that you do not have to test while in a stressful “production situation”.

>Not true Hans, this is entirely straightforward in Studio (unless the client has blocked it).

Perhaps a matter of taste, but I don't think this is intuitive: 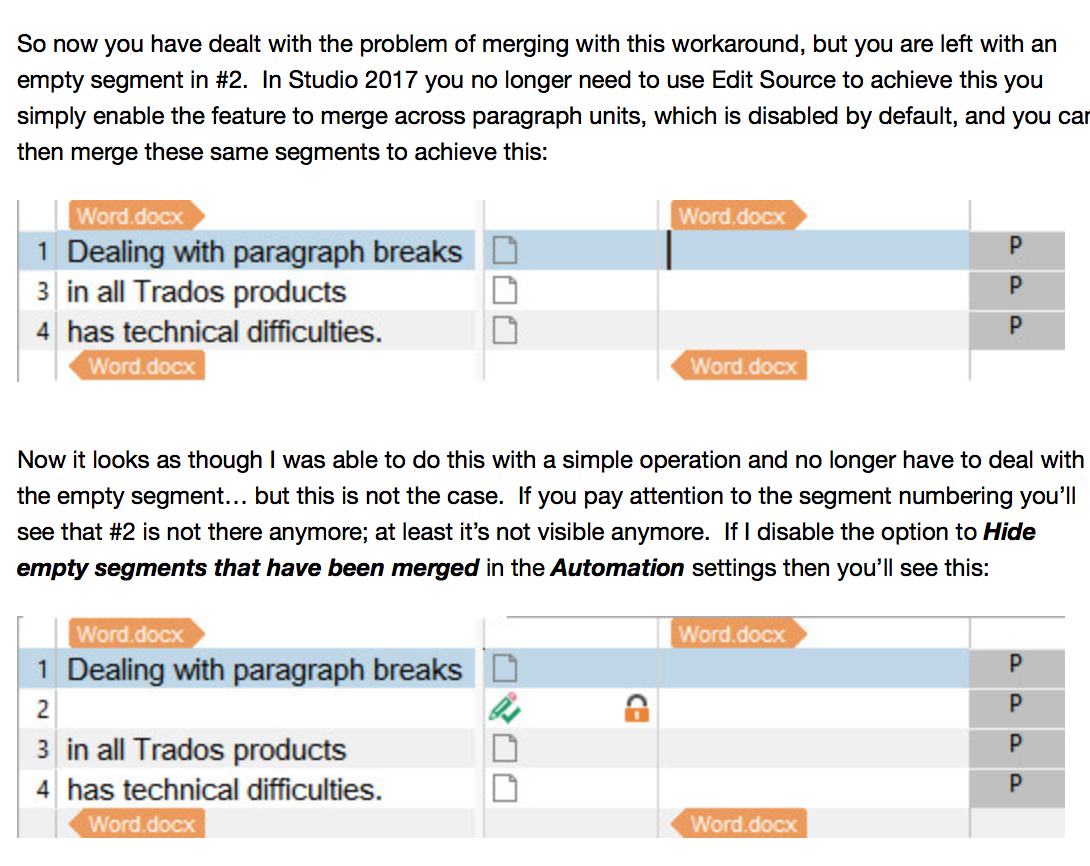 >All nonnative bilingual files that you import on CafeTran cannot be used for exporting/importing for bilingual review in Word/LibreOffice, which is a feature I often use for running Antidote (which is great for both French and English).

Hope that I understand this correctly, but you can export to html. Which you can import in a Linux word processor for review.

Yes, very good point Hans, thank you for mentioning it.

This works for Trados files and allows you to use Word/LibreOffice to perform the billingual review (and check things in Antidote as well). However, you cannot easily re-import changes back to CafeTran, you need to also make the changes in CafeTran itself. Still very helpful though.

Login to post a comment
More topics in Interoperability with Other Tools (SDL, MemoQ, Wordfast, etc.)
See all 90 topics