No memory in my cafetran

started a topic almost 6 years ago

There are a lot of things I don't understand in Cafetran... I don't understand why MyMemory is set up as automatic but it never works (I always have to select the segment I want to translate then submit it to Memory to get a translation).

But now I'm used to it, because obviously I cannot fix it.

There is something else I don't understand, maybe someone could help me. All the segments I translated with Caftan since the beginning (a few months) it seems like nothing was saved, I mean, some words are the same from a project to another but I have to manually translate everything each time. I have like no memory of anything. I really don't understand....

I have a MacBook air 2016 and Cafetran for Mac, trial version.

With regards to nothing being saved to memory, some things I learned the hard way:

1. Set up a memory for Total Recall, see the circled item on the top left.

2. Set up a memory for TMX (Big Mama as woorden called it), see the circled item in the top middle, otherwise you only have a project memory

3. Set up a Glossary, see the circled item bottom middle, otherwise you only have a project glossary 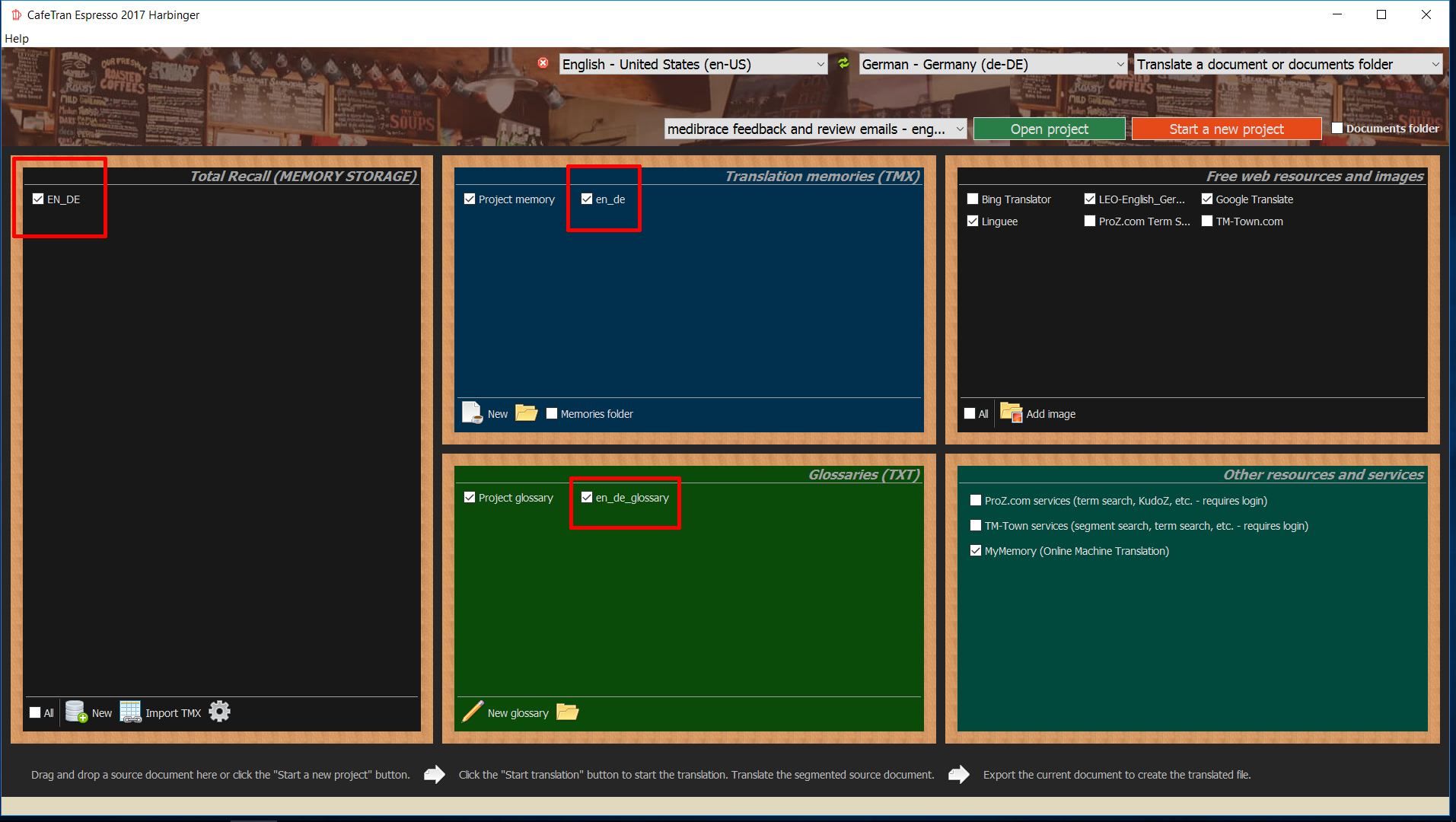 On the page with the translation mark all segments as translated with the icon I circled. This adds the segments to the TMX you set up above. 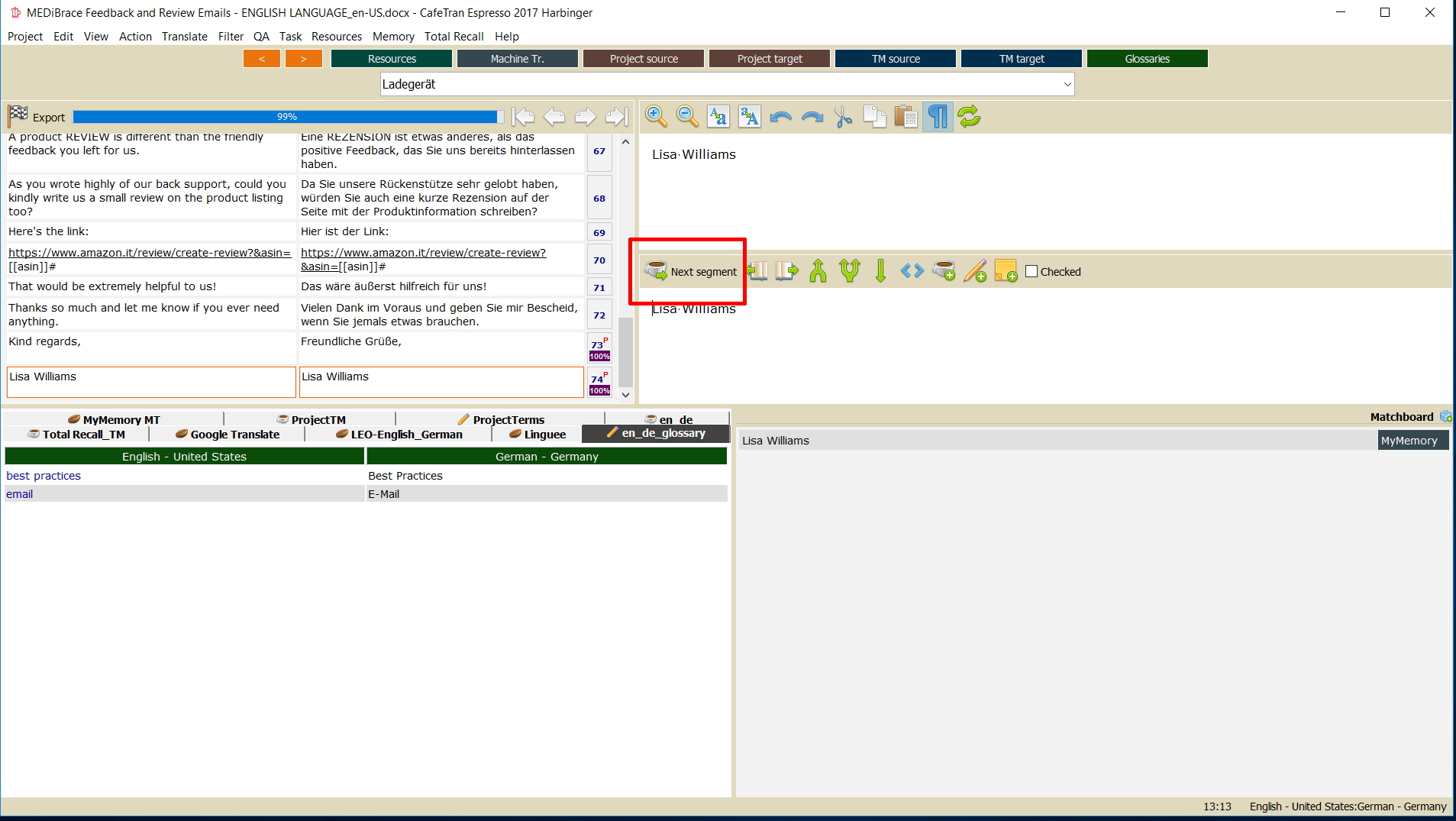 And finally add all segments to Total Recall as shown in the last image. 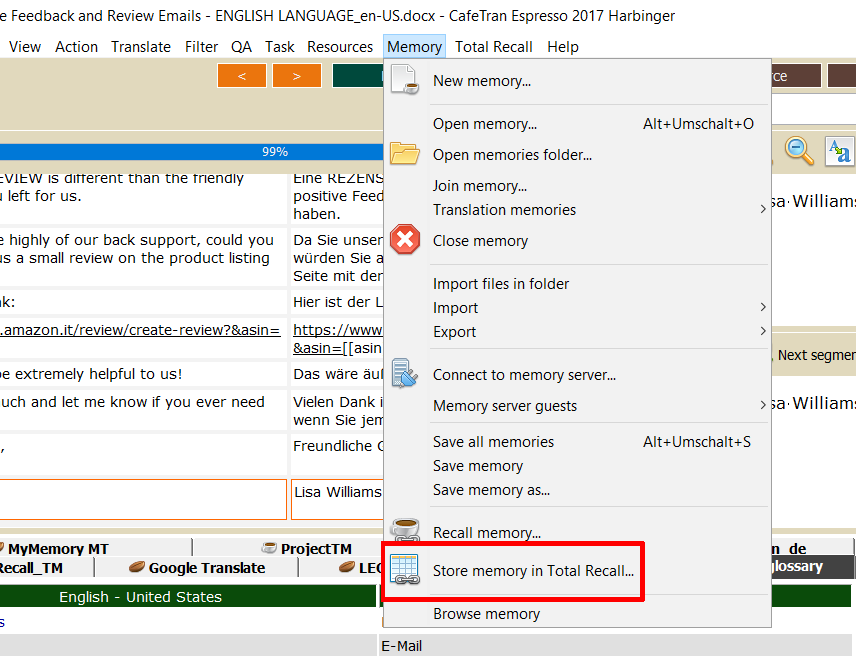 It cannot be true. They are basically the same, although one can argue the TM from Recall has fewer features than the original Big Mama TM.

I got used to it whilst using Across.

Same shit here, though decades ago. I used to work with DV3, so I set up CT like I would have done in DV3. That was alright at the time, but in those days, you could only have three resources: A TM for segments, a TM for terms, and that glossary. The glossary was supposed to rule them all, and was project specific. Now, we can have several resources (a virtually unlimited number, actually) with priorities. Since TMX memories for fragments offer way more settings possibilities (and other things),  I strongly - make that STRONGLY - recommend TMX files for words/terms/fragments.

On the other hand, using the ProjectTM seemed useless to me at first: Those segments would be saved in the Big Mama anyway, so why bother? But now, the Project TM is the most important TM I use, because it allows me to save tags, use for QA and consistency, and in the end, you can add it to your database table in one click.

Romain: I don't understand why MyMemory is set up as automatic but it never works

In the Menu, under CafeTran | Preferences | MT Services, the settings should look like this:

Did you create a TM, saved it, and opened it again for a new project?

The TM or TMs in the trial version are limited to 1,000 segments (if I'm not mistaken).

Thank you for your answer.

MyMemory under preferences looks exactly like that. I unchecked and checked and saved an hundred times but it didn't change anything. No automatic.

No I didn't create any TM, I don't recall... I always "add segment to memory" but it doesn't seem to do anything.

I unchecked and checked and saved an hundred times but it didn't change anything. No automatic.

In the menu, Memory | New Memory. Or check ProjectTM on the DashBoard (and later, Memory | Save Memory As with the ProjectTM active in the tabbed pane).

Unlimited, basically. However, large memories (from around 200k segment) slow down the Automatic Workflow considerably, even if you have enough RAM (in your case 8GB, I suppose). In that case, you may consider using Total Recall. You may also consider to increase the RAM assigned to CafeTran under CafeTran | Preferences | Memory

Not more than your physical RAM, though.

An MBA can get very hot. This may very well be because of the CPU turbo feature. If it gets too hot, see here to switch it of.

By the way, you may want to have a look at the "Solutions" on this website. It's a Knowledge Base that's pretty good (especially the music in the screencasts).

Joachim: Set up a memory for TMX (Big Mama as woorden called it)

I don't think opening a Big Mama TMX next to a TMX of recalled segments from the database table makes any sense.

Set up a Glossary

I don't think using tab del glossaries other than for regexes (if you are that way inclined) makes any sense. Use "TMX files for Fragments" instead.

I would agree that a TMX additionally doesn't make sense. Problem is only that after doing this, I have a better recognition rate, sometimes a segment or fragment is recognized in the database, sometimes in the TMX and sometimes in both. Don't ask me why :-), I take what I get.

So far I have very few entries in the glossary. I got used to it whilst using Across.

I agree it shouldn't be true. Unfortunately that's what I see. The hit rate with regards to matches has improved after I changed the settings for the database (see image). But I still face this situation. 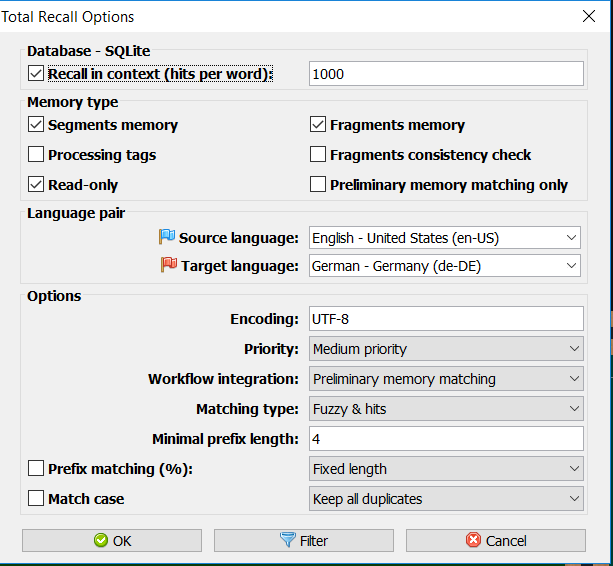 Time for His Igorness. If the settings are the same, the extracted TM from the database table cannot possibly outperform the Big Mama.

With regards to using fragments memory instead of the glossary I'll try that.

The project memory is important for me too, auto-propagation, but not as important as Total Recall or the overall TMX. I have many returning customers using the same phrases all over again, pairing speakers or headsets via Bluetooth with your mobile phone comes up all the time, same for safety instructions. Or phrases in the Forex context. I do many translations for companies from China (manufacturers) entering the German market. Unlike companies from India (mostly low cost translation agencies and not manufacturers) they value quality and accept the price tag coming with it. The scope of products is limited though, consumer electronics mostly, hence a high number of repetitions.

Woorden, we've had this discussion before. After changing my settings there still are differences in the hits. I don't care, memory is not an issue. And, if we can call it outperforming, it would be the Big Mama outperforming the database extract. Igor pointed out that the tags can have an influence on that. I don't know, I don't even understand why the tags are saved in the translation memories, IMHO it would make more sense to ignore the tags in the translation memories and also ignore them in the matching process. Different clients using the same text (e.g. Bluetooth pairing) might use different formatting options but it still could be a 100% match if you compare the text alone.

As for the "Recall in context" value, the latest build changes it to increase the probability of getting all the matches from Total Recall and avoid to load the whole database. See the recent post in the news thread: https://cafetran.freshdesk.com/discussions/topics/6000045450/page/4

The higher the value the higher probability that all the matches will be picked. However, then more segments will be loaded into RAM memory. I think this should be determined individually based on the hardware spec and the size of your Total Recall database.

Igor, that's why I raised the value "Recall in context" to 1000. The number of matches increased significantly. My database is still pretty small, close to 400 MB only, but growing quickly. Unfortunately I have to keep all duplicates, as in German we distinguish between a formal "you" (Sie) and an informal "you" (Du) which leads to the same text in English being translated differently in German. It are only few, but some customers actually want to have the informal "you".