How to remove fragments from the memory while translating?

Hello, I know I'm able to add fragments to memory as I translate without having to open the TM editor. Is it possible to do the opposite (to remove fragments) while translating?

I want to be able to eliminate those nonsense terms that are suggested the same way I can add a new fragment to memory.

-to create/start using a TMX that functions as a glossary

What CT nowadays calls a "TM for Fragments" can be used perfectly well for one word fragments as well. Simply import any TXT (tab del in a TM for Fragments.

That's perfectly easy as well. Save them in a folder, imprt the folder in CT, and save it as a new TM, e.g. Jan's Big One.

-to edit this file in order to enhance the quality of the suggestions and eliminate clutter and trash.

Drop the file (TM) on the DashBoard, and choose Edit TMX file. Under Task in the Menu you will find a lot of useful things.

What is the difference with a 'master' TMX, a TMX of all TMX's?

No idea. The term "master TMX" does not ring a CT bell.

What is the difference between Total Recall and Big Mama (being a TMX of segments, and...)?

If you import a TMX file (usually a large TM, a Big Mama) in the database table, it's not a TMX file anymore. It's a TXT file. However, if you "Recall Segments," you'll end up with a TMX file containing only relevant terms. Since TMX files are vastly superior to tab del TXT files, you'll get exact matches, fuzzy matches, virtual matches, and hits.

What is the relevance of a TermBase, is it the best replacement for the Glossary function?

How do I create a TermBase?

Same as any TMX resource, but you limit it to "fragments".

Bij de weg, Jan, I think you should forget about the External Database/Total Recall/ Recall Segments as long as you TM for Segments doesn't exceed say 200,000 segments, or if you notice a delay going from one segment to the next. I use Recall Segments all the time for a huuuge Big Mama, and for DGT TMs.

Jan: When creating a project, a project TMX is automatically added

Not really, you can uncheck the box in the DashBoard:

But I think it's better to use it, see also https://cafetran.freshdesk.com/support/discussions/topics/6000037129

I thought this was a empty database table, that can be added to a larger one such as Total Recall

Yes and no. The ProjectTM is a TMX file that can be imported in a table in the database as plain text, and to make things a bit more complicated, Recall Segments converts the "hits" in the database table to... a TMX file. That way, you use only the relevant TUs when you're translating.

I think so. It's not important yet, you probably won't need it yet. On the other hand, it may be a good idea to get used to it, creating a Big Mama memory in the form of a database table in the process.

said over 4 years ago
Hi Jan,


just a note on termbases - I initially followed the above advice on termbases/glossaries and soon regretted it. The advantage of glossaries is that they are simple text files, and thus can easily be edited in any text editor. For me that's a big advantage and easily outweighs the, to my mind, very ephemeral advantages of using 'fragment memories'. (OK; so they can also be edited fairly easily using a text editor, but it's not the same.)


Also to clarify a little Hans' explanation of TotalRecall above, the difference with TotalRecall is that

a) TR uses a database structure to store the segments, TMX uses an XML file

b) as I understand it, TR only loads relevant segments to memory, whereas TMXs load all segments to memory.
For really big volumes of data there's a start up cost with TR after which It's faster. Otherwise, as far as I can ascertain, it's quicker and easier to use TMXs.


c) TR saves you having to manage your TMs. This could be quite a plus over the long term: say you have an enquiry from an agency for an end customer you last worked for 5 years ago, with TR you don't have to worry about where you filed that TM.


d) TR carries the risk of database corruption (TMX files are less likely to get corrupted). You'd want to make sure you had a recent backup.

It is, by clicking on the blue number next to the source term, a pop-up appears that allows you to edit and delete it:

How can I open or reach that popup window 'Contents'? Clicking on a blue number in my source pane leads to no action, other than scrolling in the panes.

I'm using Cafetran for a few months now (not continuously) and think to have read all the documentation available. I've however never grasped how the memory system works and longed to open and edit these so called T' memories. All forwarding to serious sources more than welcome!

Jan, there's either a blue number next to the header, or to the very right of the entry. Just click it.

amos: so they can also be edited fairly easily using a text editor, but it's not the same

You can, but you shouldn't, because they can be edited far easier in the CT... TMX Editor, with the most common edit features already there under Task:

Plus you can use the CT Find/Replace dialogue, including the use of regexes (if you're that way inclined). But the main advantages of using TMs for Fragments are that they offer fuzzy matches, and far better fine-tuning (Edit | Preferences | Memory) and Options. 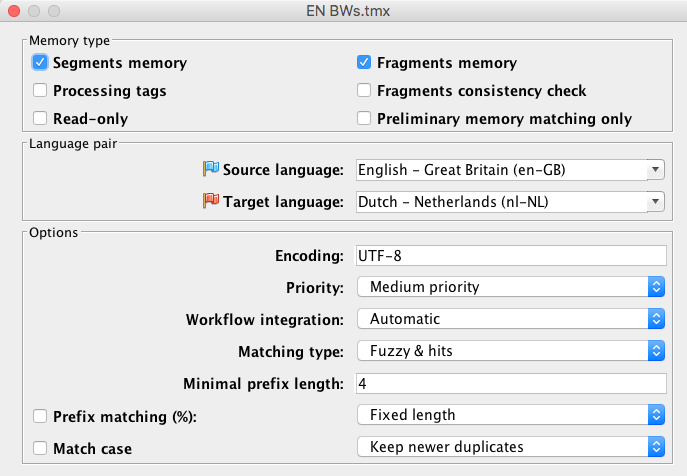 They are not limited to the metadata for tab del glossaries (and the database), so the allow for creationid, userid, etc.


Yes. But the data in the database structure itself are unstructured, and limited. So it's probably a good idea to keep and maintain your TM for Memories as will.

b) ...Otherwise, as far as I can ascertain, it's quicker and easier to use TMXs.

Agree. Which is why I suggested Jan not to use the Database for the time being.

c) TR saves you having to manage your TMs. This could be quite a plus over the long term: say you have an enquiry from an agency for an end customer you last worked for 5 years ago, with TR you don't have to worry about where you filed that TM.

Before Recall Segments was introduced, I used the Big Mama TMX Memory for Segments for that purpose. And I still add ProjectTMs to it. See above.

d) TR carries the risk of database corruption (TMX files are less likely to get corrupted). You'd want to make sure you had a recent backup.

Of course. Jan will have his Time Machine backup, so don't worry. But I still think it's a good idea to save your TUs in both. A Big Mama, and in the Database.

said over 4 years ago
Thank you.
j

I'm working step by step not to get bedazzled by the CT functions and commands (and the absence of a comprehensive manual).

That's perfectly easy as well. Save them in a folder, imprt the folder in CT, and save it as a new TM, e.g. Jan's Big One.

I'm trying to do that now.

Beforehand, I've put all my TMX files in one folder called all-tmx.

(What checkboxes to check in memory types?)

? How do I create one big tmx:

I would think 'save memory as' would be the easiest way to create a new memory that combines all other. However, I get the message "READ ONLY memory" and am stuck/lost in all the options...

Thanks for your expertise...

In the DashBoard, open a project or create one in the right language pair, in the Menu, select Memory | Open Memory... and select the folder ("all-tm", not the individual TMX files. Save the resulting merged file as "all-tm" (or something)